Just flew in from Bangkok

Just flew in from Bangkok. Great time with flight Centre team at their global conference. Hilarious and outrageous night with the international team from everywhere! We did our airline show but added a few new characters Betty Jean and Carroll Anne from United (200 years of flying between us!) As we were in BKK a new airline “Cougar Air” (do I detect a touch of Rose Hancock there?) lashings of leopard skin and just the odd ping pong ball! This was tame compared to the FC team who were in fancy dress as their fav airline. Took the LITD team to a “lady boy” show. Not Pat Pong but legit at Asia hotel. hilarious! The Shirley Bassey impersonator stole the show. Had to get a photo. (I think he also stole the Super Supremes look!) Most inspirational! Leave it to Diva’s Cast of CharactersUncategorized 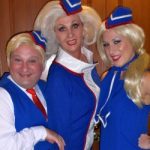 Big week this week. Just back from Hong KongUncategorized