The Hausmann Voice. Great fun at Milton Park Bowral last week for Hausmann Communications Away Day. An in-house conference organised by event guru Ilana Den for Judi Hausmann and the team. The Bus ride from Sydney was hijacked by the fabulous Penny T, a Singapore Air Hostess hitching a ride from the airport and dropped off at Mittagong make up store (Bunnings). She then became the lady of the manor at Milton Park. That Evening we performed ”The Voice” an interactive talent quest and included the B team for judges. Delta’s mother (Dawn) Seal’s brother (Seal Lee Posturepedic) and Joel’s cousin (Max Madman). Absolutely hysterical with Penny T and Tora H (2×7 ft drag-queens) hosting! The best. 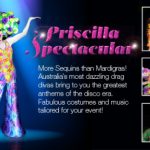